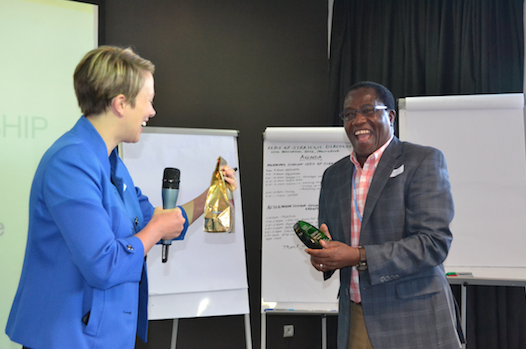 Stephen King’uyu, Coordinator of Kenya’s National Climate Change Action Plan and co-chair of the Africa LEDS Partnership and LEDS GP Steering Committee, has been awarded an honour in acknowledgement of his leadership services to LEDS GP at our COP22 Strategic Dialogue in Marrakech, Morocco.

The award was presented in recognition and gratitude for two years of dedicated and skilful service as co-chair of the Low Emissions Development Strategies Global Partnership (LEDS GP) and Africa LEDS Partnership (AfLP).

On receiving the award, Mr. King’uyu shared a few words:

“I am most grateful to those who crafted the idea of bestowing this honour on me. I do not take it as a personal honour, but an honour to my country and the people and the Government of Kenya, whom I have represented in the LEDS GP and AfLP steering committees since their inception. I would also like to share this award with other members who have served in the steering committee with me, because without their unrelenting support, my personal efforts would not amount to anything.”

The U.S. State Department’s Ashley Allen, who presented the award to Mr. King’uyu during the LEDS GP Strategic Dialogue in the margins of COP22, commented:

“From the launch of the LEDS GP, Stephen ‎King’uyu has been a low emission champion – for Kenya, for Africa and for the world. Stephen’s exceptional knowledge of low emission policies‎ and welcoming, engaging nature have made him an exemplary leader of the LEDS Global Partnership. We couldn’t have achieved what we have without his leadership.”

Mr. King’uyu went on to share some important learning points from his time spent leading LEDS GP and working for the Government of Kenya’s Climate Change Directorate in the Ministry of Environment and Natural Resources:

Firstly, LEDS can play a critical role in the implementation of nationally determined contributions (NDCs) under the Paris Agreement. For this to happen, however, there needs to be deliberate efforts to translate ‘strategies’ into action, as the focus shifts from the formulation of NDCs to their implementation.

Secondly, LEDS must be aligned to national development goals, objectives, and priorities… LEDS will not sell easily at the national level, unless practitioners go out and communicate the adaptation and sustainable development co-benefits of LEDS. From my experience as coordinator of Kenya’s National Climate Change Action Plan (NCCAP), for example, many stakeholders would not be supportive of any initiative that compromises development, and the resilience of the communities and systems.

Thirdly, it must be made clear that LEDS can ride on common practices and technologies that are not necessarily ‘exotic’ or expensive. From the NCCAP analysis, for example, restoration of forests on degraded lands provides the highest potential for the abatement of greenhouse gas emissions for the country (30 MtCO2e per year by 2030). Based on this information, Kenya’s INDC proposes to ‘make progress towards achieving a tree cover of at least 10% of Kenya’s land area’. The ten per-cent tree cover is also a constitutional requirement for the country.

Fourthly, LEDS practitioners need to create a convergence between initiatives (terminologies) that in the eyes of many stakeholders and policy makers appear competing, but are in reality complimentary. These initiatives include, but may not be limited to, low emission development, low carbon development, green growth, and green economy. All these have one thing in common: they promote low greenhouse gas development that is anchored in the Paris Agreement[1]; and should, therefore, be viewed as complimentary.

From my interaction with the Africa LEDS Partnership, the four observations I have highlighted above are relevant in the context of many developing countries.