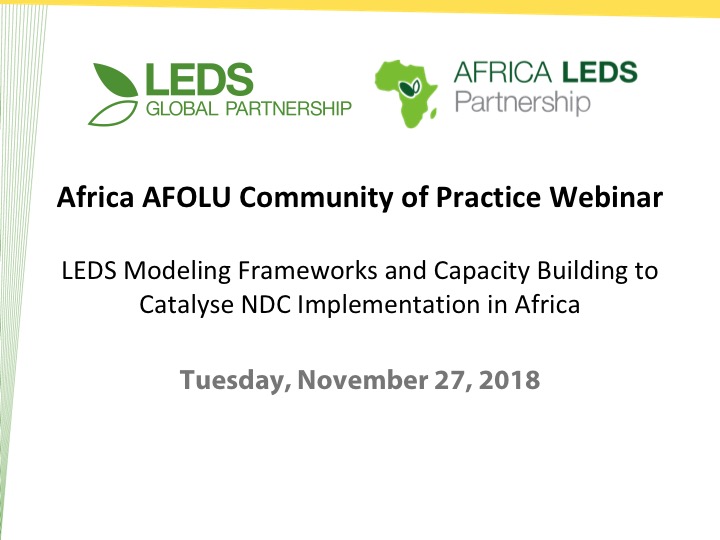 The Africa Low Emission Development Strategies (LEDS) project, with funding from the European Union, is supporting LEDS implementation in Africa in the context of respective socio-economic development priorities as stipulated in countries development visions and strategies and encapsulated in their respective Nationally Determined Contributions (NDCs). Africa, a region highly vulnerable to climate change, stands to benefit significantly from implementation of the Paris Agreement in a transformational manner that targets actions at catalytic sectors that will also advance critical Sustainable Development Goals.

To this end, the Africa LEDS project is being implemented in 8 countries, with the aim of replicating success and sharing lessons across the continent. Project implementation is under two components. The first focuses on strategic level interventions validated through a ground demonstration project, aimed at building the capacity of countries for LEDS planning and policy integration at sectorial and economy wide scales consistent with their respective climate objectives and socio-economic development priorities stipulated in their NDCs.

The second focuses on tactical, technical and technological capacity building to provide a strong analytical framework for long-term LEDS policy decision making consistent with respective country climate objectives and socio-economic development priorities as stipulated in their NDCs. This webinar, presented a general update on the overall status of the project across the 8 project countries and some of the emerging results and initial lessons that are worth sharing. The webinar also featured deep dives on two of the countries, Cote d’Ivoire and Mozambique, where results on component 1 and component 2 were presented and discussed.